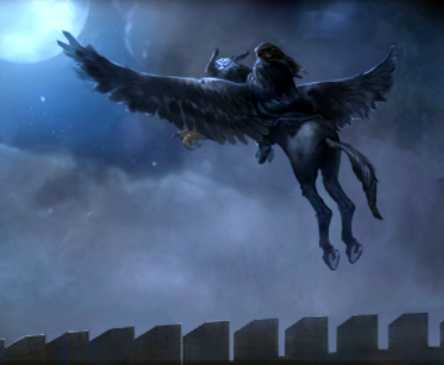 Do you ever get the feeling that you want to see more of your favourite characters in a book ? Well, I do. The world of Harry Potter and the characters that walked through the books made some of the best parts of my life. Snape is my favourite character and not far behind him (in fact missed the first place by only 0.0001 %) is Sirius Black. Anyway, the thing about reading the HP books or in that matter any book, is that it gives you a different perspective every time. With each time, you actually read the book freshly. During this re-read, it was Sirius who caught my interest. He was the closest thing to a Father that Harry had. He cared about Harry almost as much as his parents would have. Yet his life was tragically cut off (for which I will never ever forgive JK Rowling among a lot of other things). Sirius is not, as in Jo’s own words, “wholly wonderful”; he did have flaws like every other human being. But his loyalty, immense bravery and a good heart is what made him stand apart. I really loved the Father-cum-brother relationship that Sirius and Harry had. I wish we saw more of them but the books wouldn’t be the same without his death. Would it ? So, I thought I’d write a fan fiction to get over it. This is my first attempt at fan fiction. It doesn’t have a solid story. I wrote what ever came into my head. I hate to deviate from the original plot and detail. So, I tried to keep it closer to the canon as much as possible. It is not great  but it gave me immense satisfaction and happiness. I hope you like it as much as I did.
Here’s to one of my favourite characters – To Sirius Black.  Greatest friend there ever was.

“If Mad-Eye stops by, can you tell him I can’t make it tomorrow ? ”

Sirius nodded without looking up. Lupin looked at Sirius with an apologetic look on his face, about to say something but only managed to say, “See you, then”.

Sirius followed him to the door. A loud crack and Lupin was gone. He stood alone in the gloomy hallway looking at the various locks sealing themselves magically. “..you can do nothing useful”. “..hiding inside his mother’s house for six months..”. “I don’t see you risking your neck”. The words kept ringing in his ears over and over again. He was seized with a strong impulse to turn the door knob and run outside. A ten thousand galleon price on his head and the fact that most of the wizarding community still considered him a dangerous murderer did not bother him in the slightest. What could possibly happen to me?, he thought. Death. It had never frightened Sirius. He just wanted to fight. However, a second thought pulled him back to his senses. Harry. He needs me. Sirius stumped into the house looking disgruntled.

The house had been quite empty ever since Christmas. Molly and Arthur returned to the Burrow. Occasionally a member or two from the Order dropped by. Only Remus stayed in the house. He too was away working for the order most of the time. Sirius was alone in the large kitchen, rocking back and forth on the chair’s rear legs; looking at the photograph of the original Order of the Phoenix. His eyes rested on the people standing to his right. James and Lily. He couldn’t believe how so much Harry looked like his father. He missed James.

It was half past 10 already. He reckoned Harry was still awake. So, he dug out the mirror from his robe’s pocket. Hoping that Harry also carried his mirror, he croaked “Harry?”. The mirror, however, reflected his own gaunt face. “Harry ?”, he said more loudly. Nothing. Somewhere in the depths of the cupboards, he heard the elf snigger. “Stupid wretched monkey…”, he muttered under his breath. He got up from the chair with such force that it toppled backwards. Without even a second glance, Sirius strode out of the room and sprinted up the staircase. He proceeded to Buckbeak’s room in the second floor landing. The Hippogriff was sleeping comfortably with his head tucked under a pile of straw. When he heard the door creak open, the bird lifted his head up gently. Like Sirius, Buckbeak craved company and a little bit of fresh air but like his master, he couldn’t get much of both. However, whenever Sirius came to check on him, he affectionately put his head forward for Sirius to stroke him. Sometimes the bird acted very human. It was as if he knew what mood Sirius was in. There was a sombre look on his face today, as if almost sympathizing. Sirius sat down stroking him for a while. When he thought about it, both he and Buckbeak were similar. They both were convicted for something they didn’t do; they both escaped death by inches and now they both lived a solitary life. He felt slightly guilty for he believed he was responsible for Buckbeak’s confinement. It was guilt all over again.

“Are you sure about this, Padfoot?”

“Positive. It is an excellent plan . I mean, look at it this way. Who is the first person they will think of ?”, said Sirius with baby Harry sitting on his lap.

“You see it right? They are bound to come after me and with my neurotic cousin on their side, it is pretty easy to track me. We shouldn’t make it easier for them, Prongs.”

“Of course, I do! “ said James indignantly. “I meant whether he will agree to this arrangement.”

“He will do anything for you James and besides, we are not really putting him in much danger, are we? He will be the last person they will think of. Trust me, James. This is going to work out really good.”

“Hmm. I hope”, said James with a worried look on his face.

There were rumours flying everywhere that Voldemort was gone and that Harry had survived. There were other rumours too. He did not now what to believe. Wormtail was missing from his hideout. The place was empty with no signs of struggle. Fear started to rise up his throat. So he took off in his bike to find it out himself. He could see the thousands and thousands of light below the city as he flew. Once in a while, he saw a glimpse of wizard fireworks up in the sky. Celebrations. It must be true, he thought. Voldemort was most likely gone. But a sinking feel slowly enveloped him and his hands gripping the handlebar grew cold. It was not because of the chilly weather. There was a rumour that James and Lily were dead. He did not want to believe it but deep within, a part of him already knew the truth. Surely, James would have communicated the message to him about Voldemort’s fall. Or was he really ..? No. James is probably wounded, he consoled himself.

Godric’s hollow came into view and Sirius’ heart sank at what he saw. The house that he knew so well was in ruins. One side of it was blasted off revealing portions of the bedroom where the fireplace was still crackling merrily. He skidded his bike to a halt and ran into the house right away. Large chunks of wood and rubble littered the threshold and the heavy wooden door with the brass knocker had been blasted apart, a feet away. Fearing the worst, Sirius entered the house. On the floor lay his best friend. His eyes were wide open with shock and his arms bent in strange angles as though someone shoved him to the side roughly. James lay there unmoving. Sirius’ world shattered there. Every bit of energy he had came crumbling down like a landslide and he fell on his knees. He did not cry but just sat there staring at his friend. . It seemed as though his body had lost the will to even shed a single tear. His grief was beyond comprehension. Seconds passed like a lifetime and and then he heard a low moaning noise from upstairs which jerked him back to the real world.

“Lily?”, he croaked. But it was not Lily. The voice he heard was very rough. He crept up the stairs. From the top landing, he saw through the door. Lily’s body lay there. Her flaming red her covering most of her face but the bright green eyes pierced his heart and he could look at her no more. In the far corner of the room was the source of the noise that he heard. Something large and furry bent over crying. It was Hagrid. Hagrid saw Sirius too and howled like a dog caught in pain. Behind him, Harry was standing in the crib watching Hagrid weep curiously. Sirius got a wave of relief inside what was left of him. He quickly strode over towards Harry and picked him up. Harry gave him a cry of recognition and a toothy smile but his cheeks were still wet with all the crying. There was something different about him today though. His forehead bore a scar shaped oddly like a lightning bolt.

Hagrid finally seemed to pull himself together and looked up at Sirius. “Poor Harry..”, said Hagrid. “his Mum an’ Dad dead. A miracle that he’s alive.”

Sirius looked as white as a sheet and at the mention of Lily and James, his lips trembled a little. “I’m sorry Sirius. Yer best friends.. knew ’em more than all of us. Who woulda thought James and Lily of all people…”. He wiped his tears on a spotted handkerchief. “Well, abou’ time then. I must get goin’. Give ‘im to me Sirius.” and Hagrid gently took Harry from Sirius’ arms.

“Lily’s sister?, said Sirius incredulously. “They are muggles! And they hated Lily. Give Harry to me, Hagrid. I’m his Godfather. I’ll look after him”

“I know, Hagrid. But who better to look after him than his Godfather? His parents made me his guardian in case..” He couldn’t finish the sentence. A ball of fury was mounting inside him but it had nothing to do with Hagrid or Dumbledore. Hagrid looked at him sympathetically.

“I know how yeh feel, Sirius. But it is not in me position to make the decision. I’ll take Harry to his Aunt’s place. Yeh talk ter Dumbledore an’ then Harry can come with yeh. Is that okay?”

Sirius nodded reluctantly. He agreed because he had an unfinished business to do tonight. As soon as he saw the Potter house in ruins, he knew it. He knew that they were betrayed. A big price for trusting their little friend. His guilt and grief for his friends’ death fuelled a murderous rage. Hagrid started towards the door with baby Harry in a bundle of blankets.

“Hagrid”, Sirius called out. “Take my bike to go there.”

“Yeah. I don’t think I will be needing it anymore.”

He strode over towards Hagrid and took Harry in his arms for one last time before Harry left. “Good bye, Harry”, he said and planted a kiss on little Harry’s head.